by Mike Safley (excerpted from two articles written in the 1990's) 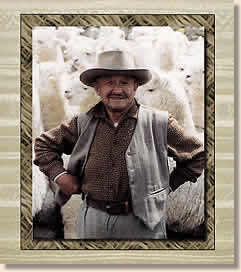 I first heard Don Julio Barreda's name in 1990. I had asked a Peruvian friend, who was in the alpaca fleece buying business, a simple question, "Who has the best Alpacas in Peru?" My friend replied, without hesitation, "Don Julio Barreda."

Today, after many years of rigorous genetic selection, Barreda has redefined the alpaca. His ranch maintains two herds of huacaya. One herd produces a fine, but less dense fleece of 20 microns or less. The other herd produces a very dense fleece of up to 24 microns. Most of these alpaca produce over 10 pounds of fleece annually.

"After more than five decades of breeding, I can identify some modest achievements. The Accoyo herd is uniform in all respects. I have been able to breed well-defined Alpaca phenotypes with an absence of atypical animals. There are no huarizos, suri huacayas or huayaca suris in my herd.

“The Accoyo production charts document a doubling of annual fleece yield per animal since 1946. During the same period, the herd's average body weight per animal has increased 25%. I have also created a second line of huayaca bloodstock which I call "select." This herd is being selected for fineness. I have great expectations for this project, and from time to time we end up with exceptional little cria.

“I attribute Accoyo's success at breeding alpacas with superior production qualities to the father's lineage. My machos were all bred and selected at Accoyo, and my herd has not suffered from the influence of sires with unknown fathers. I can truly say that the sires of Accoyo have been more than enough and I am proud of the results." 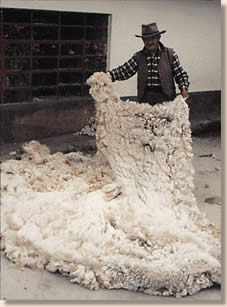 Alpacas are ultimately judged on their ability to produce high quality fiber. At Accoyo, ranch records document a doubling of fleece production, on a per animal basis, since 1946. The dramatic nature of these results was demonstrated when 462 huacayas were shorn prior to entering quarantine for the 1995 Five Star Alpaca Import Sale. Of the 462 huacayas, 92 were from Accoyo. The Accoyo fleeces averaged 8.61 pounds. The 370 fleeces from six other farms averaged 6.31 pounds - a difference of 2.3 pounds, or 36%, per animal per year. The fleece of this select group of Accoyo huacayas averaged 22.13 microns and some had micron counts as low as 17. The average standard deviation was 4.82 microns and the co-efficient of variation averaged 22.91%. These results are even more amazing based on the fact that the average Accoyo animal was three years old.

People are amazed to see alpaca after alpaca yielding a minimum of 10 pounds of fleece from the annual shearing. Several males' fleeces from the Plantel herd weighed over 14 pounds.

Samples of fleece from the males in the Accoyo Plantel herd were analyzed by Yocom-McColl Testing Laboratories in Denver, Colorado. The results document a herd of alpacas with low micron fleece (often 20 or less, low standard deviations (often less than 4), and low coefficient of variation (often less than 20%).

THE ART AND SCIENCE OF HERDSIRE SELECTION 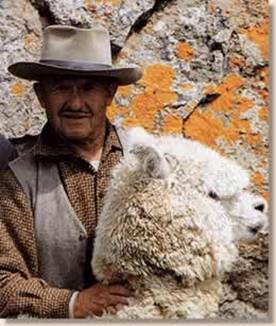 Don Julio Barreda takes great pride in the machos of Accoyo. He has been relentless in his pursuit of genetic excellence, rigorously culling and refining his bloodlines for 50 years. A male's first test at Accoyo falls on the anniversary of his birth. The yearling is sheared and if he does not produce six pounds of fleece he is culled. The next test is at two years of age when the potential herdsire must produce ten pounds of fleece to survive.

Fleece weight is not the only measure of quality. Each macho must have a refined elegance, Accoyo’s trademark head, large stature, and fine, uniform fleece. "Seventy percent of the entire Accoyo fleece clip grades baby," says Peter Kothe, the man in charge of buying fleece for Mitchell Bros., one of the world's largest purchasers of alpaca fleece. Kothe also says the "entire clip" includes leg, belly, and neck fiber from the total herd, young and old, not just the "Royal Family" or "Plantel" Alpacas - amazing testimony to the quality of the Accoyo production.

[In describing his initial goals after acquiring the Accoyo ranch, Don Julio explains that] "In pursuit of this second goal, I decided to purchase "refresadores" (refreshers), machos from the best farms in the region, hoping to accelerate the process of increasing fleece yield. But my experience with this approach," says Don Julio, "was so negative that I decided to stick with my own males."

PEDIGREES: A HISTORY OF SUCCESS 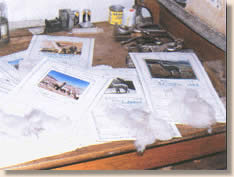 The father's lineage is at the heart of the Accoyo breeding philosophy. "I've kept pedigrees for all my machos" says Don Julio. "Each pedigree indicates both the fleece weight and micron count of the fleece harvested during the alpacas first two shearings." The Accoyo pedigrees have a lock of fleece attached, from each shearing, together with all the other pertinent information.

The breeding males of Accoyo are selected from the "Royal Family" which is maintained for the exclusive purpose of producing herdsires. The "Royal Family" or Plantel animals make up 20% of the entire herd. Bloodstock from the Plantel herd are sold to commercial producers throughout Puno, Peru.

This method of selection has created an alpaca herd which produces on average the following fleece specifications:

These averages for fineness exceed the micron count of the smaller Royal Family's bloodstock. Some of his machos yield 15 pounds of fleece at their second shearing. Don Julio believes that his average alpaca's fleece is about two (2) microns finer, in each category, than that of his competitors' animals.

What has been accomplished at Don Julio's beloved "Accoyo" is known to every alpaca breeder in South America. He is truly first among his peers. Now pure Accoyo bloodstock is available to breeders in the United States. American breeders are beginning to appreciate why - Don Julio Barreda is truly the world's finest Alpaca breeder.

To learn more about the amazing Accoyos gifted to the American herd by Barreda: View database of original Accoyo imports.